Filters
Recently, we made an overview of the e-commerce market to determine the CMS most preferred by online stores in 2017. 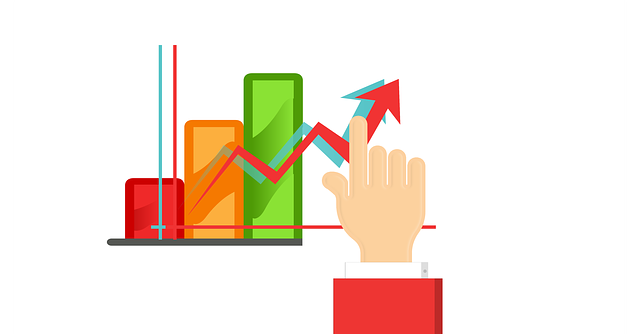 Since our last study conducted in March 2016, many things changed. A number of e-commerce platforms made their way in the leaderboard, however, some solutions lost their positions. So, the current standings are presented below.

Our findings are based on the data provided by BuiltWith. This service studies the e-commerce market providing the audience with the latest statistical reports in this field. In our overview, we analyzed the same number of most popular online platforms as in 2016 in order we could compare their achievements for the last year.

First, the study goes through the first 10K BuiltWith listing of e-commerce stores. Then, we analyzed the situation in a more global context – for 100K web stores. And finally, we conducted a general overview of the market that includes the one million pool of web stores presented by BuiltWith.

The leading position on the e-commerce market now belongs to WooCommerce – 18,05%. After a long struggle with Magento, this platform managed to defeat. It has a lot of reasons to succeed and the first one is the popularity of WordPress. The second reason is that WooCommerce is free and sometime installed just in case, without actual usage for real sales. Anyway, it exceed all other platforms by the number of installations. 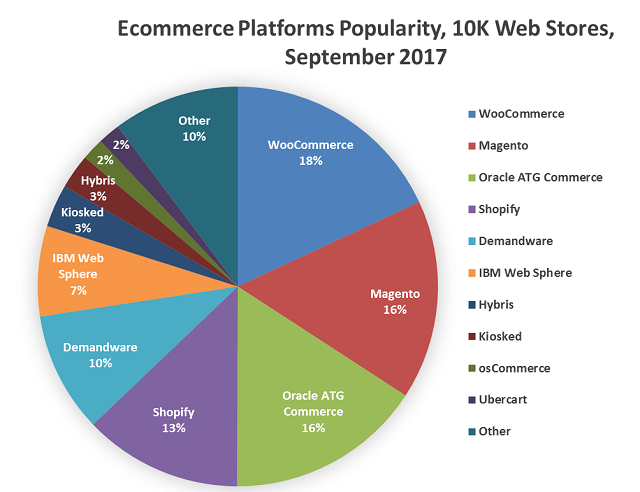 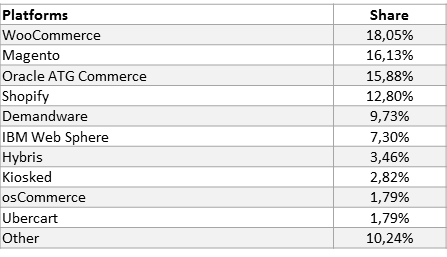 In this segment, Magento is just slightly behind the leader – 16,13%. This means that it still has all chances to take the leading position among most popular e-commerce platforms. Combining a broad functionality with perfect usability, Magento remains a perfect solution for many online businesses all over the world.

Shopify and Demandware occupy the 4th and the 5th positions in the list – 12,80% and 9,73% accordingly. They have a lot of great features, but are not always suitable for any type of business. For example, with Shopify, merchants can start operating quickly. However, being a cloud solution, it doesn’t provide any chances for code changes.

Demandware, in turn, also doesn’t give online businesses much freedom, as every web store that works on it is fully controlled by the Demandware company. However, both platforms are constantly supported and updated, so their popularity among web stores might grow even further.

IBM Web Sphere Commerce is just behind the TOP 5 with the 7,30% market share. The platform offers an intuitive interface in combination with broad functionality for e-commerce activities (targeting offers, trigger scenarios, embedded adaptive web stores, etc.). But, it costs a pretty penny compared to some equally effective competitors.

Hybris is the number ‘seven’ in our rating and takes 3,46%. It has a large set of features for highly-loaded web stores (handling large amounts of data, purchase accelerators for B2B and B2C, mobile platform support, etc.), but sometimes it appeares to be difficult to work with. Recently, Hybris has begun to actively penetrate the Eastern European market, which will arguably result in a positive trend in the use of this platform.

Kiosked that also suffers the problem of being not-so-friendly to users is slightly behind – 2,82%.

osCommerce and Ubercart occupy the last positions in the top – 1,79% per each. Compared to the competitors in this segment, both CMS are less convenient. osCommerce, for example, is quite resource-intensive, which increases requirements to hosting. Ubercart, in turn, hasn’t been improved anyhow recently and, thus, its interface today looks outdated.

Now, let’s move on to the next part of our overview and see how the 100k world best e-commerce stores listing look like.

On a larger market, several big players remain on the same positions that they occupy on the market for 10K web stores. 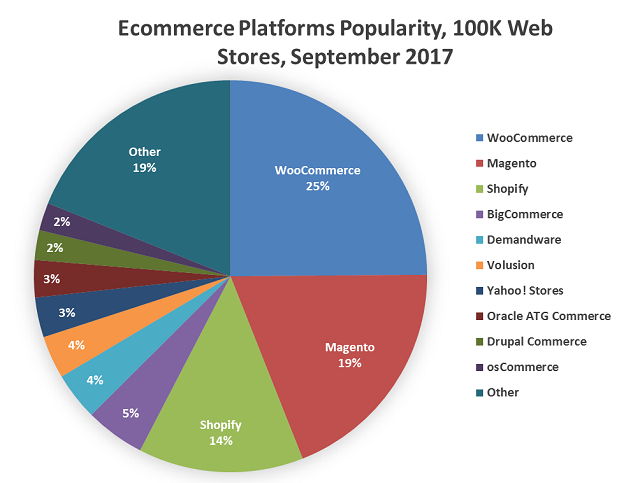 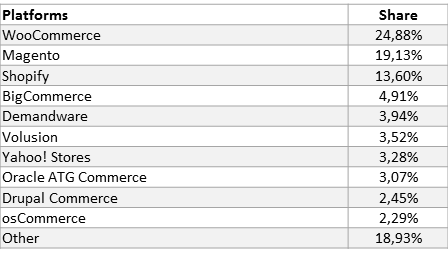 Shopify slightly improved its positions compared to the top 10 e-commerce platforms per 10K web stores. Now, Shopify occupies the 3rd place of the leaderboard – 13,60%. The owners initially stated the platform to be created for small and medium-sized businesses that run web stores processing 50-500 online transactions per day. That’s why the standing of Shopify in this segment is expectedly better.

From the table, we can see that BigCommerce surprisingly found itself among the leaders – 4,91%. For many years, BigCommerce helped small businesses to manage their e-commerce activities, thus, it secures itself a good place in the market segment for 100K web stores. With BigCommerce, a web store can be created in just a few clicks. Such easy solutions are not cordially welcomed among large players, maybe that’s why it is far behind the leaderboard in the 10K segment.

In the case of Demandware, there are no surprises. The platform occupies the stable 5th position and has 3,94% of the market share. Initially developed for world-leading retailers, Demandware is constantly improved to adjust to the needs of the wider market. Those improvements concern multi-stores support, personalized offers, usability issues, etc. Looks like Demandware strives to become a universal e-commerce solution, just like WooCommerce and Magento.

Volusion is slightly behind – 3,52%. Relatively low costs (for $180 per year, you can create a small web store with up to 100 items, and here, we talk about the basic package) and a simple interface makes the platform highly demanded among small online retailers. However, compared to the competitors in this segment, Volusion has no a lot of functionality extensions. As a result, store owners often choose the platforms that can offer a wider range of add-ons (Magento, Shopify, Demandware, and the like).

Volusion is followed by Yahoo! Stores – 3.28%. As its many competitors in the leaderboard, Yahoo! Stores is a good solution for beginning store owners who have no much capital. However, its functionality is notably limited in comparison to those e-commerce solutions that occupy higher positions of the rating, so it’s often just not the best choice for retailers.

For Oracle ATG Commerce, this market is not so welcoming, which results in the 8th position and 3,07% of the market share. Such situation might seem as a significant fall compared to the market with 10K web stores, but do not forget that initially, the platform was designed to meet the needs of enterprises and top e-commerce players.

Drupal Commerce breathes down the neck of Oracle ATG – 2,45%. The engine helps to operate web stores without heavy loads. Thanks to it, Drupal managed to reach the list of the top e-commerce solutions.

Compared to the figures for the market of 10K stores, the situation for osCommerce slightly worsened – 2,29% and the 10th place in the top. Being not-so-friendly in terms of system requirements, this platform still remains among the best options for multiple online retailers.

In the final part of our overview, we will look at a bigger picture – the market with a million of web stores. 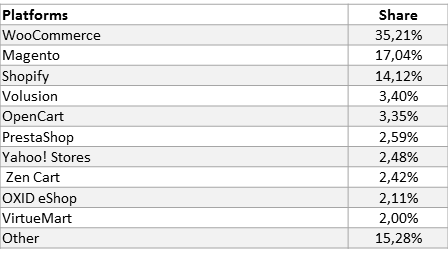 On the market for 1 million stores, there are no changes among the top 3 e-commerce solutions. As before, WooCommerce dominates – 35,21%. With the growth of the segment, the share of Magento significantly decreased – 17,04%. Shopify is slightly behind Magento, but again, it occupies the 3rd place in the top – 14,12%.

Speaking on the rest of the platforms in this top, one should say that the situation here is unstable. The table shows that all the solutions that occupy positions of the top in the range from 3rd to 10th are very close to each other in the terms of market share. It means that, say, VirtueMart which today occupies the last position in the top with its 2% might be easily displaced from this list tomorrow and again return this position or move even higher after a while. These movements depend on the interests, needs, and possibilities of mainly small businesses and startups, as they constitute the major part of the market.

The dynamics over the last year shows that Magento gave an inch in the battle with WooCommerce. However, it is still one of the most popular e-commerce platforms worldwide. Big players, including Magento, WooCommerce, and Shopify share top 3 positions across all the studied segments, while other solutions  either take own audience, like Oracle ATG, or try to gain more users in their highly competitive environments.
Tagged as Magento 2 tips