Filters
To be aware of the current reality and keep pace with the modern tendencies, aheadWorks has researched the popularity of e-Commerce platforms. It’s far from a comprehensive analysis but we hope it’s a good indication of the actual situation at the market. Having studied and compared the results of the recent surveys, we came to some appealing conclusions.

Launched in 2007, the Magento platform has already changed the e-Commerce sphere and occupied the leading position at the market. Being the ultimate e-Commerce solution, nowadays it serves tens of thousands of merchants worldwide. The high popularity of the platform is proved by the survey that takes the top 1 million sites provided by Alexa, the web information company.

Magento is the obvious leader with 24.8 % of sites being attributed to the platform. 3.8% of the sites appear to be using Magento Enterprise Edition that means that the number of corporate companies moving to the platform is increasing.

All the attempts of Zen Cart, which had the largest gains and doubled its results in 2011, still didn't let it to excel Magento. It has only the second place with the result of 16.8%. Virtuemart is the third most prevalent software having 15.2%. The largest e-Commerce players are holding their positions expanding their market shares. The top three account for over 50% of stores in the survey.

The oldest player of the market, osCommerce, goes to the fourth place having 10.1% of sites. It saw the largest loss last year giving way to its rivals. As a result, osCommerce lost its leadership at the market. Its downward trend is more and more visible. PrestaShop follows in the list with 9.8%.

By the way, there are a number of e-Commerce platforms that had seen steady growth by the end of the previous year, including Volusion and Interprise Internet Shop, though they are remaining the lower players.

2011 was obviously successful for Magento. The platform has been demonstrating its constant growth since its launch and it shows no sign of slowing. With the acquisition of Magento by eBay in the middle of 2011 and integrating it into X.commerce, the rating of Magento has actively been growing. Lots of companies have been joining the platform making it more powerful in the global marketplace competition. 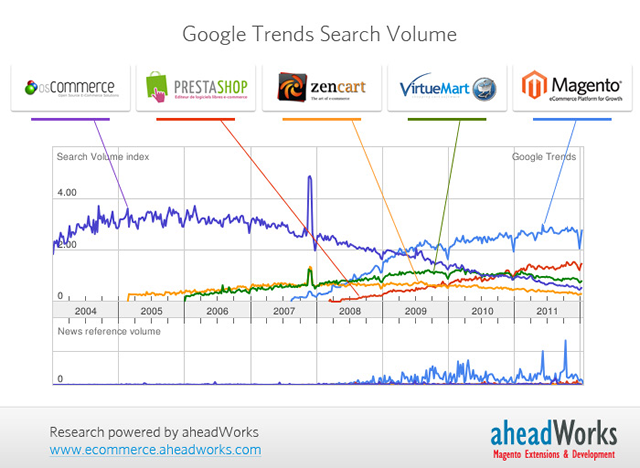 Magento continues to reign as the most popular platform. It is very flexible and customizable without having to get stuck into the code. It is PCI-compliant that is important for stores to handle credit card details. All the advantages of the platform undoubtedly contribute into the high traffic flow in Magento-based online stores. The platform is extending its leadership in the e-Commerce sphere. The new year is likely to be even better.