Filters
About a year passed since we published our last e-commerce platforms comparative study.

Let's take a look at changes in the e-commerce platforms market structure. We'll reveal the most recent competitive balance in this sphere and compare it to our previous surveys in order to distinguish trends and market shifts.

This study is based on Alexa 1 Million Top sites examination and provides percentage ratio of sites, which use different e-commerce platforms. The results of this study can't be interpreted as an overall description of the market or considered apart of this survey.

Magento takes a leading position among ecommerce platforms and is much ahead its main competitors. Its share is almost about 34%, which is more than one third of the overall quantity of sites using e-commerce platforms. Over the last year it considerably increased its share and despite the leadership still grows faster than the competitors.

Magento CE is traditionally followed by PrestaShop, which takes the second position. The third position is a great surprise, but very pleasant. Magento EE left behind VirtueMart, Zen Cart, osCommerce and took the third place. It’s a great achievement, which has resulted in share growth by 48% in comparison with 2013. 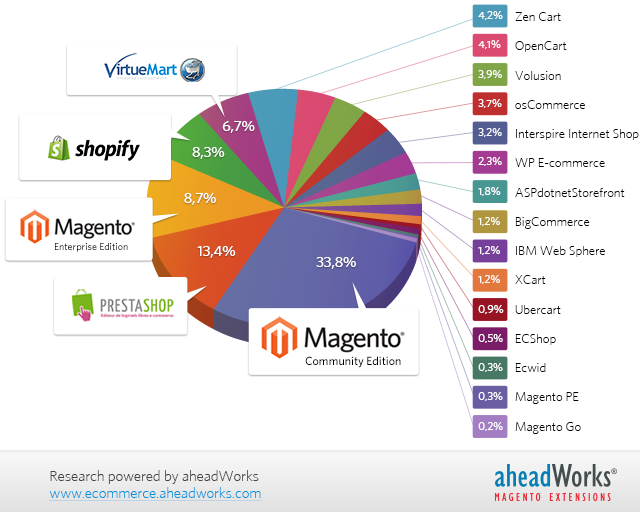 We have several ecommerce platforms, which increased their shares since the last survey:

Shopify is an absolute leader in terms of growth. Last year it was out of TOP 5 e-commerce platforms, and now it takes the fourth position. Amid this Magento EE achievement looks a bit modest, but still great. It moved from the sixth to the third place within a year, while Shopify and Magento EE are drastically different in price and potential audience.

Naturally, some platforms have shrunk:


The second straight year VirtueMart, Zen Cart, and osCommerce are losing their positions, while Volusion’s share is rather stable and is about 4-5% each year. 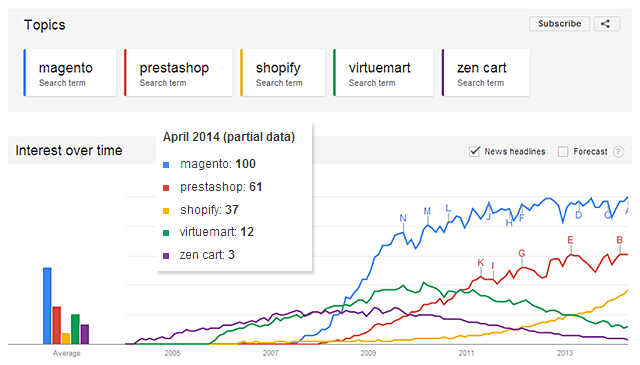 Google trends completely confirm our results. Magento search volume is the biggest in April, 2014 and is significantly ahead its main competitors. The sequence of competitors is exactly the same we have in our study, and the recent growth of Shopify on the graph is fully consistent with our findings.

Magento is interesting for users all around the world, the same as Prestashop. Shopify dominates only in Australia and Northern America. VirtueMart is popular in Eastern and Central Europe, while Zen Cart in China, Australia, and Northern America. It seems that Shopify takes its share primarily from Zen Cart, but will affect other competitors in case of further expansion.

According to eMarketer, in 2016 China will overtake the U.S. in total spending online, and in 2014 Asia-Pacific region will exceed Norther America.  So, let us discover what e-commerce platforms take leadership there. Of course, we cannot consider search volume of terms as the current market situation, but still have a chance to reveal general competitive environment. 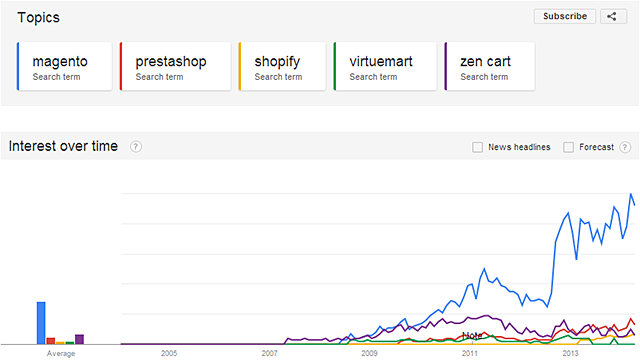 Magento takes leading positions in China and has almost no competition there. Here it gained a great potential and seems to have excellent perspectives. 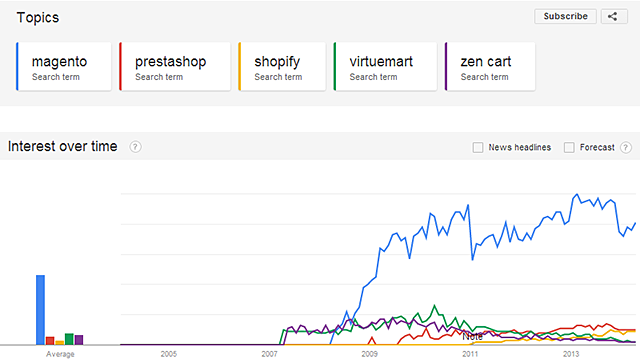 In India it also is an absolute leader.

However, in the U.S. the situation differs, as Shopify here has almost the same search volume as Magento. But Magento itself does not significantly decrease here, and we may conclude that Shopify is taking from other competitors so far.

Australia, the same as the U.S., is almost equally interested in Magento and Shopify, and the other competitors can hardly influence this parity.

Brazilian users demonstrate decline of their interests in the mentioned above e-commerce platforms. Perhaps it is caused by local economic crisis or they switch to some other substitutes. Anyway the recession is clearly detected, however Magento has a leading position here as well.

Thus, Magento takes leading positions in all five countries and in three of them it is an absolute leader. But it obviously can't rest on its laurels, as competitors are close enough.

Please, share your opinion or own researches of e-commerce platforms in the comments below. This will help us build more holistic picture of the subject.
Tagged as Magento 1