Filters
Once a month we feature our partners and their Magento stores on the aheadWorks Blog. Meet Steve Tallent, President at Beeyoutiful.com, who was one of the first adopters of Magento.

Steve will tell us about the first frustrating years of using Magento, the money he has spent to get a theme that was breaking with every upgrade. He also talks over the positive changes happened in the past few years and describes the extension of his dream.

Already intrigued? Keep on reading to know the lack of what extension can make his staff literally cry.

What: Beeyoutiful.com sells vitamins and other nutritional supplements, as well as some natural skin and hair products. 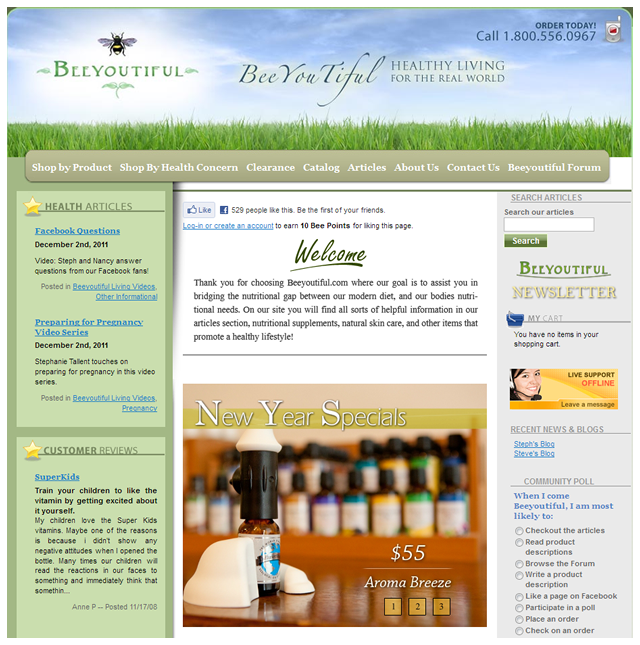 Q: Can you specify the list of extensions you've installed on your store?

A: Currently in production we have:


We have Advanced Search, iPhone Theme, and Video Testimonials in testing.

And we're looking at RSS Reader, Checkout Promo, Market Segmentation Suite, and a couple of other extensions.

Q: How long have you been running your store?

A: We have been in operation since March of 2006, so just about 6 years. We've been on Magento since mid 2008. We used osCommerce before that.

Q: Why did you choose Magento as your current platform?

A: We were on osCommerce before, but the entire platform started going downhill. We had to edit core files. Edits here were breaking things there. I hired a programmer to fix this, and when everything was done, the result was something else broken. Then I had to pay the guys to fix the second thing. Sometimes they couldn't find the problem. It got really frustrating because I was paying these guys, and not getting very far. It was even more frustrating when they couldn't find the problems, and me, with my extremely limited knowledge of programming (I can read parts of the code but not all), was able to identify and fix some of the problems they couldn't find.

We started looking around, chose Magento because of its flexibility and extensibility. I have the code. I can pay anybody to work on it, so one company isn't going to have me over a barrel. I can get to my data whenever I want, export it, and move to a new platform if I want. Those aren't possibilities with a lot of other platforms.

We looked at it when it was brand new, and we were one of the first adopters, which meant there were a lot of bugs, and there weren't a lot of extensions. We spent a lot of money to get a theme that broke with every upgrade, and extensions that did basic functions, but didn't do them very well. The first couple of years were frustrating.

We are so pleased that Magento has matured and that companies like aheadWorks are making extensions that cost hundreds of dollars that are far superior to the extensions we built for thousands. They are easy to install and there is a top notch customer support. The added bonuses make the experience even better.

Q: Do you use only aheadWorks’ extensions in your store?

A: No, we use some custom extensions and a few others we purchased from other companies. But we have almost as many AW extensions as we do all others combined, and with the quality extensions coming out from aheadWorks we'll probably keep adding more.

Q: Why did you choose aheadWorks Co. as a Magento extensions provider?

A: Well, to start with, it was because AW made the extensions that did what we wanted. And I guess that is still the case, except that, if there are multiple companies providing an extension with the same functionality, we'll usually choose aheadWorks because of the support, the ease of installation, the full compatibility with new Magento versions, and the compatibility and interoperability among AW modules.

On Monday I'll post the second part of this interview, where Steve speaks about the most powerful module and shares his thoughts of the ideal ‘search’ extension. Stay tuned!