The importance of social media is high for each brand, as most of us contact followers with promotions, important notifications, feedback requests, and some brands even provide customer service via social media.

So, we asked ourselves a question: “What are the differences of social audiences of main e-commerce platforms? Do they have something similar? Perhaps, they have some overlaps or similar locations, or anything else?” The presented below survey is designed to address these questions.

The survey covers the Magento Twitter audience, which is one of the most important social media for the platform, compared to the PrestaShop and Shopify Twitter accounts.

Key findings of the survey are given at the end of this post.

Magento is the oldest Twitter inhabitant, but much less active than Shopify, for example. Shopify also has the best followers/tweets ratio. Each tweet brings Shopify 9.2 followers per tweet, while Magento gets 8.4 followers, and PrestaShop -2.3.

So, total quantities of followers of the mentioned above platforms differ greatly, as it clearly demonstrated on the diagram above.

But to be absolutely realistic this diagram should look like the following:

We analyzed 10 thousand followers from each account and determined that the audience of these three platforms has considerable overlaps:

The overlap of the Magento and PrestaShop audiences is the biggest and mostly presented by digital companies and developers, according to the randomly chosen sample from the mutual 14.2% scope.

All three platforms have 2.2% of followers, who follow all the platforms at the same time. We analyzed a 10% sample of randomly chosen following accounts from that array, and got the next results:

The quantity of abandoned accounts is significant in this sample and makes up to 40%, but we can disregard them. The companies and independent developers working at the junction of platforms or with all three platforms simultaneously constitute 40% of the total quantity, and this is the main relevant group.

Main Interests of the Audiences

The study of top keywords from the audiences profiles determines them as the following:

The main finding from the table above is that PrestaShop and Magento followers are much similar to each other. The structures of their main interests match each other greatly. More clearly we can demonstrate in on the diagram below. 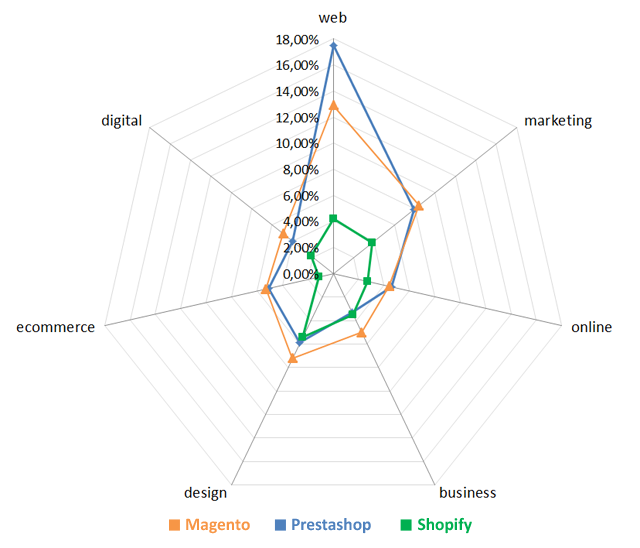 As you see, Magento and PrestaShop Twitter followers are interested in almost the same topics and to the same extent. Their followers like “web” and “marketing” topics, while the Shopify audience subjects of interest are more diversified and directed towards “design” issues.

How can we explain those similarities of Magento and PrestaShop Twitter followers? Clearly, the platforms themselves and their peculiarities can explain this phenomenon.

Magento and PrestaShop are both open-source e-commerce solutions written in PHP, what allows PHP developers work with them both extending their functionality. While Shopify is a SaaS e-commerce platform designed for SEM businesses and mostly attracts theme designers.

So, now we know that Magento and PrestaShop twitter followers have much similar and the Shopify Twitter audience differs from them in many aspects. But we can find out even more insights about those audiences, which greatly present the entire platform business communities.

Analyzing the frequency of posting on Twitter by those audiences we discovered that the Shopify Twitter audience is the most active. Almost 60% of its followers had tweets last week, while only 51% of Magento followers and 49% of PrestaShop Twitter fans tweeted within the same period.


And again, the distribution of tweets by days and weeks is greatly similar for the Magento and PrestaShop audiences (see the diagram below).

45% of the PrestaShop Twitter audience is located near Paris, Berlin, Amsterdam, Rome, Madrid, Stockholm, and some other nearest European cities, while other locations are minimal for this platform.

The Magento audience is primarily described by three main geographical areas: Western Europe, the U.S., and northern India, near New Delhi. The European area of Magento is more widely distributed to the west and east, compared to PrestaShop, and the Eastern Time zone is the most popular in the U.S. for Magento.

The same as Magento, Shopify is interesting for New York, Ohio, Pennsylvania, Georgia, North Carolina, New Jersey, etc. residents, however, the Indian share it has is three times larger than Magento has in that region. Perhaps, it is explained by the policy of the platform striving to get leadership in India and South Asia.