Filters
The market of ecommerce platforms is changing constantly since ecommerce itself develops steadily embracing new branches, areas and stores.

Some platforms decline while other ones rise, and this fluctuation gradually changes the entire ecommerce environment and transforms the market structure. As far as we have already accumulated a lot of data regarding platform shares dynamics, it allows us to describe the ecommerce platforms market scene and forecast their further evolution.

All the graphs on the diagram obviously belong to three main trending tendencies: stable, increasing, and declining shares.


Magento and PrestaShop are relatively stable saving their market shares through the years. WooCommerce and Shopify rise throughout the whole period of study, but WooCommerce slows down gradually and has seemingly exhausted its growth potential. VirtueMart, Zen Cart, and osCommerce decline along the time slightly reducing the deceleration.

So, what makes some platforms more successful and what are their main features? We examined TOP 5 ecommerce platforms within the Alexa 1 Millon Top web sites selection and built their profiles by several key attributes. And, their differences are just clear.

Of course, English is the most popular language worldwide and our investigation fully confirms this assumption. Generally, 59% of studied online merchants use English as the main language in their stores. Spanish is in the second place (8%), and then follows French with the 7% share. 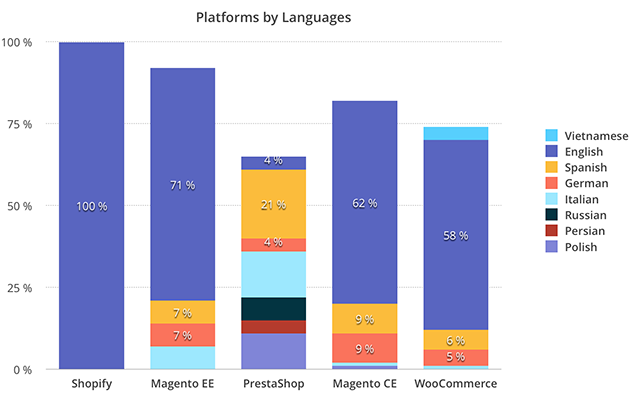 This structure above looks pretty natural, except Persian, perhaps, presenting surprisingly plentiful Iranian online stores. But, if we further analyze the platforms by their languages, we will find a lot of remarkable discoveries.

We can see that Shopify based stores use only English and no other languages at all. It’s an amazing fact that will find an explanation a bit later. WooCommerce is the most diversified platform by the number of utilized languages, still English prevails for it. Just as both Magento CE and EE platforms give rise to mainly English stores.

And, only PrestaShop is the platform, where store owners are likely coming from non-English speaking countries almost entirely. French and Spanish dominate here; next are Italian, Polish, and other languages.

The Shopify’s structure by countries consists of only English speaking countries, except India. But, Indian merchants also prefer English in their stores, since this language is widely distributed across the nation. That is why Shopify stores are entirely focused on the English-speaking audience. 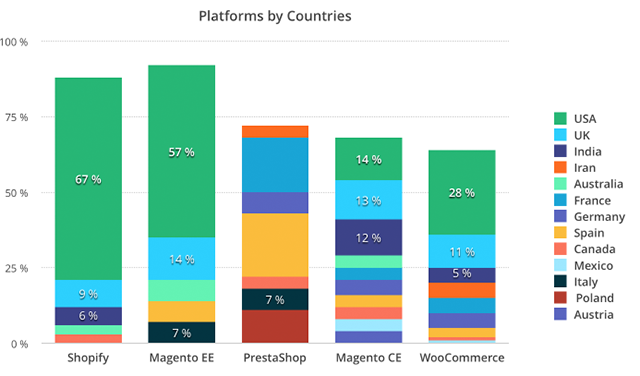 Magento CE has the widest geography among the examined platforms and, although it originates from the US, the United States share takes only 14% of all Magento CE stores. Still, US entrepreneurs are the most active players of the ecommerce market and dominate across all platforms, except PrestaShop.

PrestaShop can be rightfully called European ecommerce software, since about 70% of its stores are located on this continent.

In order to find if the explored ecommerce platforms have any product specialization, we aggregated stores in several main product segments and got the next visualization. 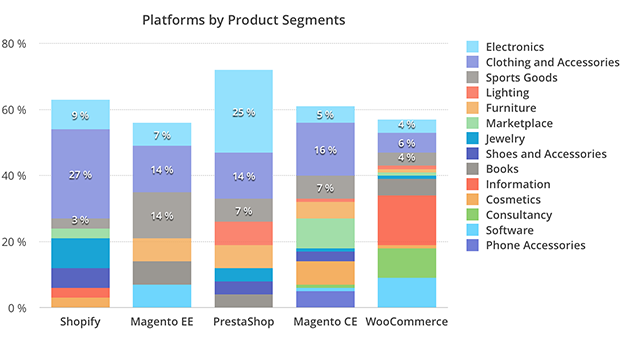 Of course, it is a motley picture, still we can define some popular products typical for certain platforms. Clothing and accessories stores are dominant for almost all platforms and especially popular in Shopify. Electronics is also common for most platforms, but other product sets and shares differ greatly.

The only generic thing is that Shopify, Magento EE, PrestaShop, and Magento CE mostly sell tangible products, while WooCommerce hosts a substantial share of information and consultancy stores.

As far as the pool of explored web stores is taken from the Alexa 1 Mln Top Sites list, we have also compared average Alexa positions of studied platforms and got the following results. The average Alexa position of all stores is 543 039 and, if we compare it with the average platform showings, we can say that Magento EE has the best average position, while other platforms’ ranks are located close to the total average.

The average products price of the study is $214. The average prices of Shopify, PrestaShop, and WooCommerce stores lie below this benchmark, while Magento CE and Magento EE stay higher. Simultaneously, the Shopify’s store prices are the smallest ones (160% below the average), and Magento EE stores sell at the highest prices. And, it seems to be natural at least for Magento EE since it targets the enterprise market segment.

This way, we have got pretty different profiles for the studied ecommerce platforms, which still have their exclusive niche within the market.

Shopify takes the lowest price segment and mostly spread in English-speaking countries, especially in the US. Shopify store owners sell a lot of different products, but mainly clothing, accessories, and electronics.

PrestaShop is mostly popular in Europe and utilizes a lot of European languages. The average prices of PrestaShop store products are slightly below the total average mainly represented by electronics, clothing, and accessories.

WooCommerce sells intangible products (information, consultancy services) in most cases at the prices below the average. Most stores are made in English and popular in the US.

Magento CE is the most diversified platform by languages, countries, and product segments without certain leaders within. The prices of most stores are above the average benchmark.

Magento EE belongs to the enterprise market segment and this determines its basic characteristics, including high prices and limited product sets. The platform is mostly popular among the US merchants  and in English-speaking countries.

Have something to add? Leave your comments below, please.
Tagged as Magento 1