This article starts our Ecommerce Markets Overview series, where we’ll evaluate most promising local ecommerce markets and consider Magento perspectives within them.

Our first destination is China – the biggest and one of the most rapidly growing ecommerce markets in the world. According to eMarketer, online spending in China will reach one trillion dollars in 2018. Compare, the US online retail market will just exceed 500 billion dollars by that year.

Online spending in China will reach one trillion dollars in 2018

Forrester says that this success will be possible including because of the booming extension of mobile applications used for purchasing by Chinese consumers. All dominating local b2c online operators, including Alibaba and JD.com, recently increased their mobile sales rates considerably and surpass the same rates of their US counterparts.

Furthermore, according to Forbes, JD.com have recently partnered with WeChat, the biggest chat service in China with 468 million active users monthly, which will certainly make mobile sales in China even more accessible.

The main peculiarity of the Chinese online market is that its astonishing growth doesn’t oppress brick and mortar sales, while just pushes the overall commercial activity. Online sales generate incremental consumption within the national economy and shape a new shopping behavior characterized by the combination of online and offline purchasing paths.

Due to the national character traits, Chinese customers are constantly looking for the best deals, widely use coupons and discounts, and ready to wait some time in order to get the best price. Still, shipping terms and coverage are very important for China, since the growth of domestic delivery services lags the explosive growth of sales.

Current number of e-shoppers in China is 300 million people

The China’s ecommerce market potential is absolutely great. According to the estimations, the current number of online shoppers in China is more than 300 million people, while the number of internet users exceeds 600 million people. Amid this, the today’s internet penetration rate is only about 46%, which is almost twice lower than in the US and most European countries.

Nowadays the Chinese b2c ecommerce market is divided between Alibaba’s Tmall and JD.com holding 57% and 21% shares respectively. It is greatly different from the market environment in the U.S. and Western Europe, where most sales pass through numerous small and midsized stores.

Most domestic and foreign companies operating in China prefer to use the above marketplaces rather than run a single store. Regardless the reasons led to this this situation it seems to be embarrassing for ecommerce platform providers, including Magento.

Perspectives for Magento-based Stores in China

The Chinese ecommerce market has both great potential and multiple pitfalls for a successful market entry by Magento and similar ecommerce solutions.

The first pitfall is the competition from Tmall, Taobao, and JD.com, which seem to leave no chances for newcomers. On the other hand, the potential of the market is tremendous and Magento can count on some market share, as far as the requirements to the quality of products and services will obviously rise in the region.

Frankly speaking, Magento has already made some preparatory work in China. It has a local community of development companies and successful Magento conference – MagentoCom (China). All this warms up the interest to Magento and makes local entrepreneurs consider it as an option to start business online.

Diagram 1. Ecommerce Platforms Popularity in China (by the number of webstores using the .cn extension in domain names) 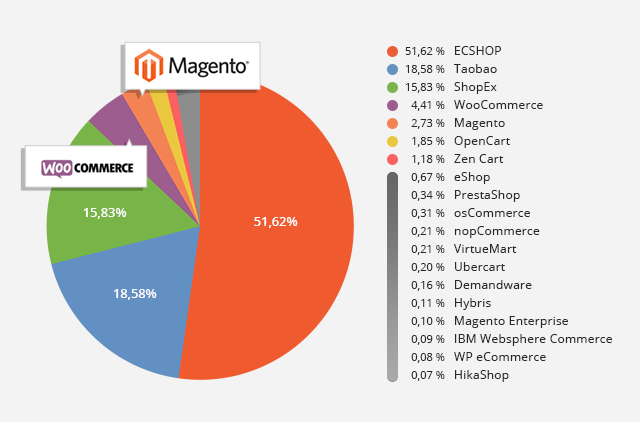 Imagine that if the popularity of Magento in China was the same as it is in the U.S., even now it would require 120 times more Magento websites to serve the current Chinese online sales value. (Source: BuiltWith). It’s a pretty good piece of work, isn’t it? However, currently Tmall hosts all those sellers individually, totally more than 70 000, including international ones such as Apple, Casio, and so on.

Magento has the biggest share in China among other e-platforms

Are there any premises for the situation to change? Yes, they are.

China is a highly potential ecommerce market for new coming branded stores and dedicated software solutions, accordingly. However, the current position of leading ecommerce players, Alibaba and JD.com, is so strong that even big brands prefer to join their marketplaces rather than develop own stores.

Still, the most natural way of development for the Chinese ecommerce market is a gradual fragmentation with the advent of a big number of small and medium branded web shops.

Leave your comments below, please.