It’s been a while since we published our last survey on shopping platforms and their growth/decline on a highly competitive eCommerce software market. If you wonder what was going on in the woods back in 2012, take time to read our February and September studies while we move forward with a new statistics and latest changes within half a year.

First things first, let’s clarify some issues. We have analyzed stores from the Alexa Top 1 Million and now publish the pie chart to illustrate the popularity of different platforms. Keep in mind that all numbers in this article are relative, meaning they have no absolute values and can't be viewed separately.

I also anticipate your doubts regarding the impartiality of this survey, especially because we have reasons to play with data and highlight Magento greatness. I assure you – it won't happen and I will tell you outright who is hard on Magento heels. Let’s get started then!

MAGENTO. No surprise, Magento Community Edition with almost 30% spread is favored by many newcomers, savvy merchants and those migrated to Magento from other platforms.

Magento Enterprise Edition is in a higher demand, jumping forward from 4.6% in September 2012 to 5.8% at the moment with the number of EE websites increased by 27% (!). What caused this progress? Several months ago Magento team announced a big bonus - a free upgrade from Magento CE to EE for a limited time, and turned out, this marketing move bore fruits.

The spread of eCommerce platforms in July 2013: 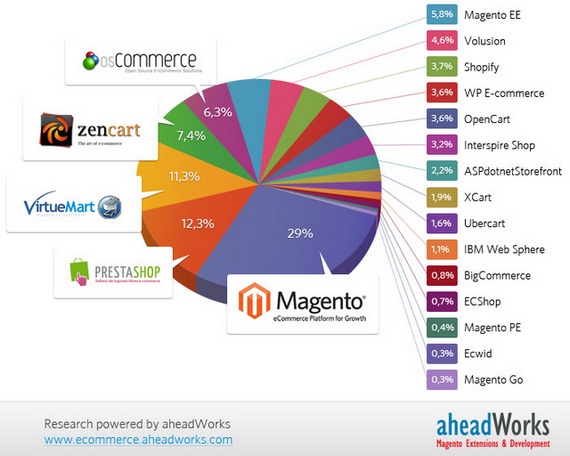 The nearest Magento competitor, PrestaShop, got the 2nd slice of pie - 12.3% in spread. One amazing thing happened to PrestaShop: it never came that close to Magento before. As for today, PrestaShop easily outran previous leaders Zen Cart, VirtueMart and osCommerce and moved from 9.8% to 12.3% in a year.

ZEN CART. For Zen Cart times are also changing. Having the 2nd position at the end of 2012, now it is qualified only as 4th with 7.4% market share.

VIRTUEMART AND OSCOMMERCE. The same drastic decline in spread showed VirtueMart and osCommerce. Every couple of months they are losing ground little by little to other ambitious runners.

The circle graph with the most popular eCommerce software in February 2013, revealed at the Imagine eCommerce Conference 2013, displays slightly different numbers, yet, the same tendency is observed. 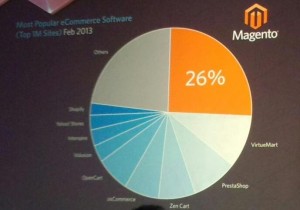 Magento is fully ahead of its competitors, PrestaShop and VirtueMart are neck and neck in the competition and Zen Cart with osCommerce are left far behind.

Now let’s refer to Google Trends and the interest over time Magento, PrestaShop, osCommerce, VirtueMart and Shopify aroused in the period of January 2010 through July 2013. Numbers represent search volume relative to the highest point on the chart, so graphics below introduce relative dependencies and not absolute values. We will not examine Traffic Flow as we did before, since Google recently disabled this feature.

Worldwide trends reveal dominant position of Magento over time. It went way ahead of others and currently no platform is close to beating Magento demand. Its curve will hardly go down (what happened lately to osCommerce, VirtueMart and Zen Cart), though PrestaShop’s and Shopify's tendency to march upward may look threatening.

Initially PrestaShop didn't look like a leader (at least in 2010), but situation changed within 3 years, putting PrestaShop behind Magento's back. Who knows, if it continues rising up with the same ardor, Magento should start thinking on a defense weapon.

The same occured with Shopify. From being not particularly popular in 2010, it jumped to heaven in 2013 and outperformed eCommerce veteran osCommerce.

The United States and Other National Trends

Worldwide survey shows an overall picture of the eCommerce platform mainstream, often highly influenced by the U.S. top charts. Graphic below looks almost the same as Worldwide with one big difference resulting in extreme demand for Shopify in North America. Wow-wow, Magento, be on guard!

Why don’t we also explore statistics from other local markets and their interest towards these platforms?

Congratulations on reading until this moment! You’ve reach the end of the eCommerce platform analysis from aheadWorks and it's time to summarize all said above.

Share your ideas on eCommerce platforms market and argue actively with what you just read. The more comments you leave for this post, the better analytics you’ll get from aheadWorks in the future. Be also sure that if many of you request a specific survey on particular platforms, we’ll do that. ;)