Filters
Often, the result of hard and long-term work can be expressed in just several figures. So, we continue to draw the contemporary ecommerce landscape investigating the forces able to bring changes to our everyday online shopping experience.

Many things have happened since our last study and the Magento 2 release was the most significant event, of course. We found many remarkable changes within the e-platforms market reflected both in pace corrections and new statuses. But, the best ever news of our study is that we found Magento 2 stores in the Alexa 1 Million Top web sites list. So, follow us below.

Traditionally our findings are resulting from the Alexa 1 Million Top web sites study detecting ecommerce functionality within the research list. Individual platform shares are calculated basing on the whole set of found ecommerce stores taken as 100%.

Note: The obtained results are accurate only under specific conditions of this study.

Magento continues to dominate the market and takes 29.1% of the total market share. WooCommerce, as usual, is slightly behind and its chances to lead the race are currently uncertain. The platform’s expansion slows down rapidly and the latest relative growth rate showing is about only 2% compared to almost 10% just 6 months ago. 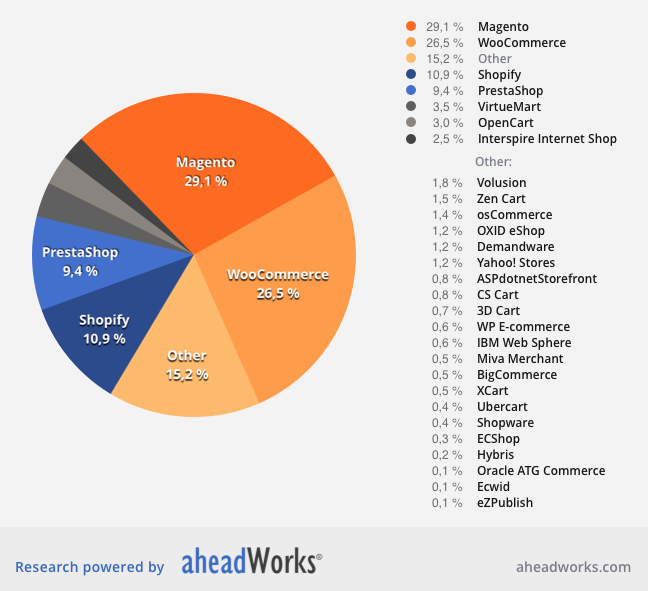 At the same time, Shopify breaks all records and already takes the third position in our study ahead of PrestaShop, which just recently has moved to the fourth place of our “chart”. Shopify demonstrated an amazing spurt with the 17.4% relative market share growth index achieved since our last study.

The Top 5 in our ranking also includes PrestaShop and VirtueMart. PrestaShop stays near Shopify, while VirtueMart is three times smaller than PrestaShop. In fact, the first four platforms take 75.9% of the market in our study. 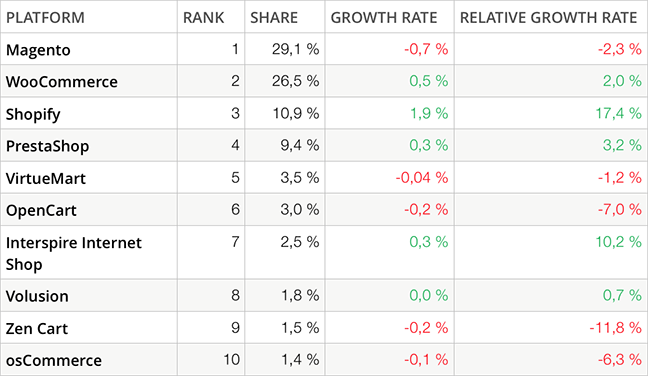 Within the Top 10 ranking Interspire Internet Shop is the second most successful platform in the past six months. Of course, its growth rate is not so significant as Shopify has, but the relative growth rate is pretty much considerable. And, if we sum up the growth rates of all first ten platforms, we’ll notice that they still continue biting from the rest of the list rather than competing with each other. The Top 10 platforms overall growth rate is +1.8%. 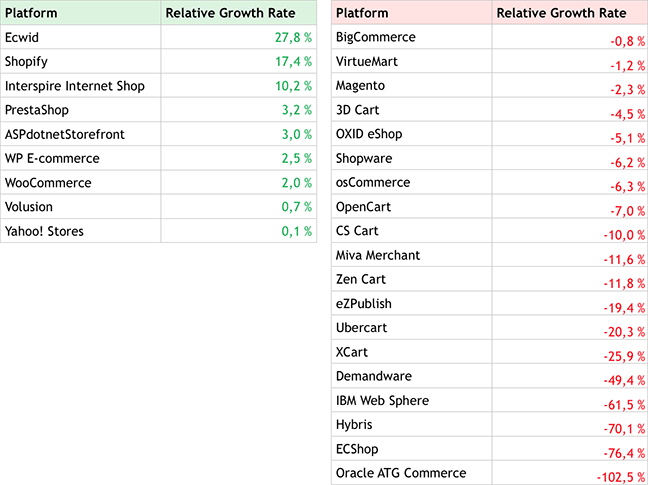 The ecommerce market is growing in absolute, of course, but only a few platforms are able to take advantage of this to the full. The number of declining shares is twice bigger than the number of growing ones. Furthermore, 5 of 9 growing platforms are located in the Top 10. So, taking into consideration their overwhelming domination in the market all other companies seem to be forced just to fight for survival.

Numerous relatively small platforms show continuous declining through our previous studies, however, they also have own heroes, e.g. Ecwid, which showed a great result in the past period and grew by 27.8%. By the way, Ecwid shopping cart is distributed as a plugin for multiple popular CMS systems, including WordPress. So, it seems that WordPress becomes a real mover for different e-platforms such as WooCommerce, WP E-commerce, and Ecwid now.

Ecwid is also one of the four shopping carts increasing their shares during our two last studies along with WooCommerce, Shopify and PrestaShop. These platforms constitute only 14% of the whole list, so the competition is really fierce in this market.

Most importantly, in this study we found a number of Magento 2 based stores within the Alexa 1 Million Top web sites pool and are thrilled to present you the profile of this first ever segment.

Starting from this year we expect a rapid growth of the number of Magento 2 stores within the analyzed data array. This should make the united Magento share even larger and keep it ahead of other competitors. According to the latest data we have, the demand for Magento 2 extensions increases exponentially proving that the new platform has a great potential to add even more to the market.

Still, the market is far from falling asleep, since all existing shopping carts are making their best to earn new customers and change the current landscape of ecommerce software.

To be continued…
Tagged as B2B Magento 2 tips