Magento and Shopify are two powerful platforms working for the needs of the e-commerce market.

Though operating in the same industry, these two solutions were developed in different ways. In this article, we will determine the current market position of each platform and consider their future perspectives.

In our study, we performed a comparative analysis of web stores that run either on the Shopify or Magento e-commerce platforms. All the data was obtained from the according BuiltWith databases.

Some of the above parameters are provided by Builtwith as it is, while others are derived from the representative samples built upon the related Magento and Shopify databases.

So, let’s consider each parameter individually.

Magento outperforms Shopify by the average position within the Alexa 1 Mln Top Sites listing just slightly. The average position of the studied Magento stores is 509 919, while Shopify is just next to it with the 552 476th position. Still the distribution of stores within the 100K Alexa segments is quite different.

Diagram 1. Stores within the 100K Intervals of the Alexa Top 1 Mln Websites Rating 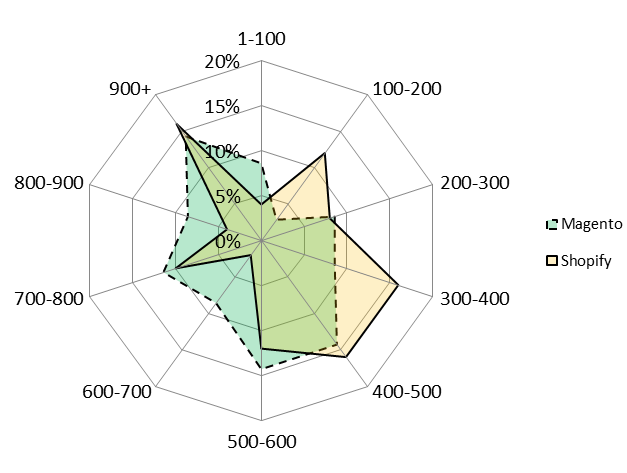 Magento is more consistent through all the sectors except only the 100-200K segment perhaps. Shopify is more unstable and gets down in the 1-100, 600-700, 800-900K segments. Speculating about the reasons of this unevenness we might only presume that the process of engagement into Shopify is still not stable rising different portions of e-commerce stores per time unit.

Now, let’s consider what business domains choose the websites designed on the Magento and Shopify platforms.

Magento and Shopify stores are almost equally distributed among the main business fields: Outdoor Products (7% of the market share for Magento and 6% for Shopify), Sport Products (6% and 4% accordingly), Food and Beverages (7% and 9%), Cosmetics (7% and 6% respectively), Electronics (18% and 11%), and Vehicles and Accessories (20% for each platform).

Though both solutions are largely used in the Clothes domain (due to its relative dominance on the e-commerce market), for Shopify, the market share of clothing web stores is 36% and for Magento, it’s only 21%.

We suppose that this fact shows once again that Magento is suitable for any online businesses and more universal. Equally effective, it suggests selling absolutely different products with necessary profits.

Now, what are the average prices for each of the above-described product types?

As you can see below, Magento sells twice more expensive items on average across all the types of products, while the traditional for Magento branch Clothing is even three times more expensive. Shopify is better suited for the needs of small businesses that traditionally occupy the niche of low prices, while Magento-based stores tend to operate on higher markets. 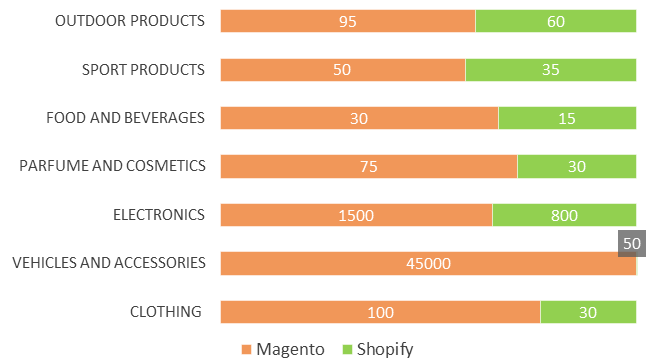 According to our investigations, the average price of the whole Magento market is about $130. The Shopify stores usually sell products at $70 on average.

Distributed by products, the average price rates for Shopify stores fluctuate between $15 and $60 depending on the industry. Magento makes from $30 to $100 per product.

According to the data provided by BuiltWith, the overwhelming majority of e-commerce stores located in the United States makes this region dominant in the list of top e-commerce countries – 73% for the Magento stores and 89% for Shopify stores correspondingly. 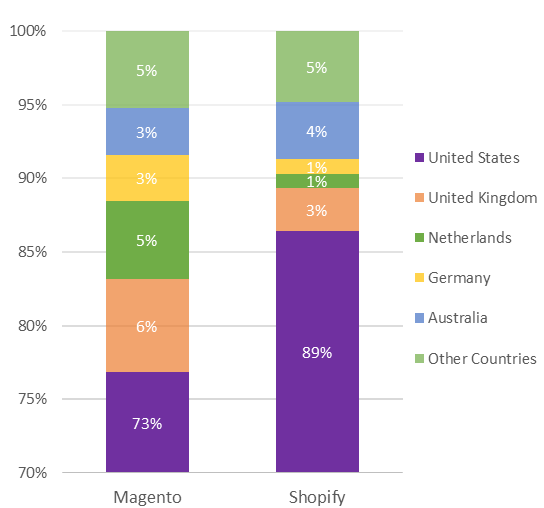 The other countries take a much smaller share of the market. The United Kingdom is second big player takes only – 6% for Magento and 3% for Shopify.

The Netherlands and Germany that are literally obsessed with effective e-commerce solutions prefer Magento – 5% and 3% accordingly. For Shopify, however, the share of these countries on the market is not significant – 1 % for each region.

Due to the growth of online shopping in Australia, this country gained the position among the top e-commerce countries – 3% for Magento and 4% for Shopify accordingly.

The other regions take small shares for both platforms – only 1% for each country.

In terms of language usage, the biggest part of Magento stores – 50% – are made in English. 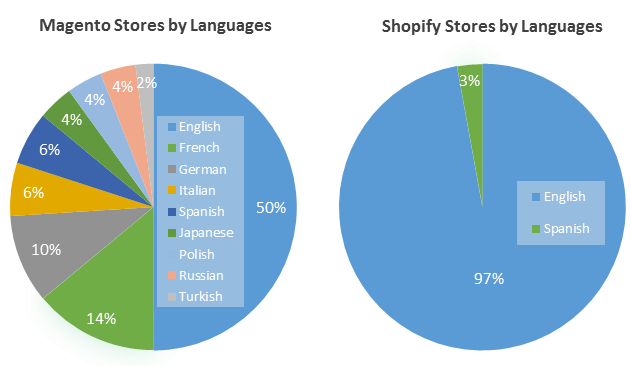 The French and German languages occupy the 2nd and 3rd positions in this list – 14% and 10% accordingly. Both languages are quite popular in the e-commerce field, still, they are not so common for web stores as the English language.

Apart from the Turkish language with its 2%, the other languages have the equal market shares across Magento stores – 4% for each. So, as you can see, Turkey also gradually becomes a significant player within the global e-commerce market.

Almost all Shopify stores are in English – 97% of the market share, which proves the fact that this e-commerce platform is not so diversified in the terms of language usage as Magento. Perhaps, it also shows that the platform is significantly oriented towards the English-speaking countries.

We can also notice that Spanish becomes quite popular among the Shopify merchants (compared to the previous study) – 3% of the whole market share. The shares of all other languages are too small to be taken into account.

The results of the study gave us two different profiles of the studied e-commerce platforms.

The study shows that Magento and Shopify, though initially served for the needs of different audience segments, now begin to notably compete with each other, as Shopify makes its way towards the larger businesses share.