Through the years of the Magento market share investigation, we collected a significant data amount, which is interesting to be interpreted as a trend. We believe that this data is able to explain the way Magento is now going and its farther perspectives.

By 2012 and the start of our studies Magento gained its greatest popularity, according to Google Trends. So, our first blog post on the topic indicated that Magento CE had almost 25% of the market share. Since then, its share fluctuates around this mark rising or descending due to the specific circumstances of each investigation, but didn’t change considerably. 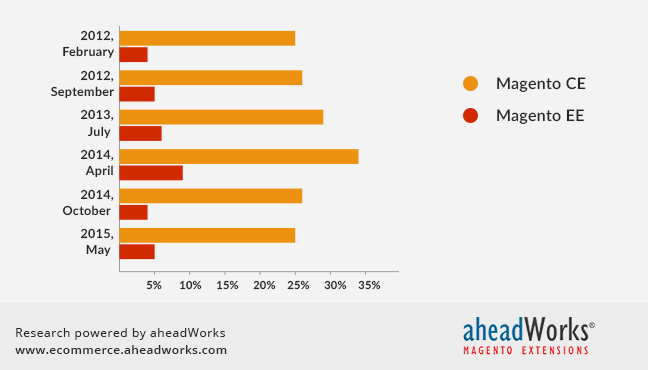 Anyway, the fact remains: Magento takes one quarter of the ecommerce platforms market share for 3 years running. It is great since Magento keeps its leadership in a highly competitive and dynamic market.

Let’s see the changes, which accompanied the stability of Magento in this period. 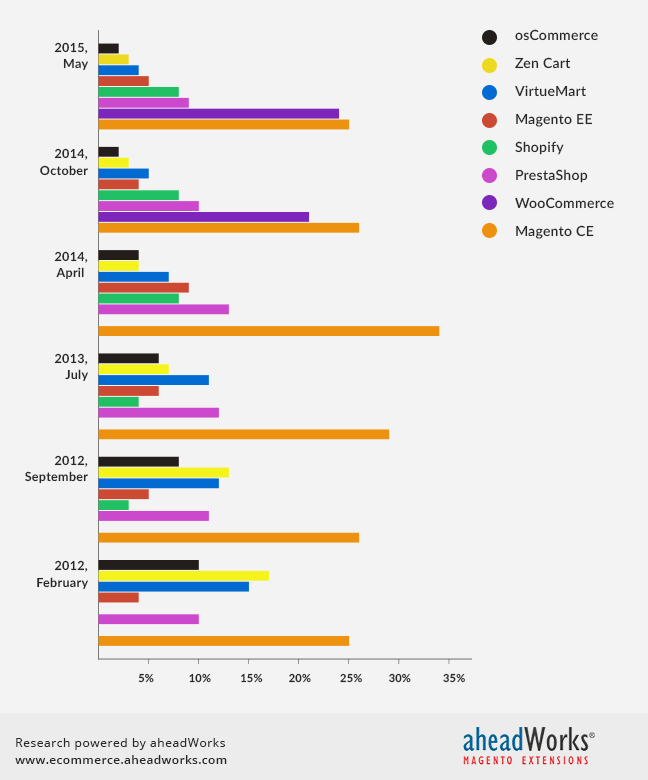 The top five ecommerce platforms by the market share in 2012 were the following: Magento CE, Zen Cart, VirtueMart, osCommerce, PrestaShop. Some of them originate from 90-s and are real veterans in the market at this time. As you can see, all of them are open-source downloadable software.

This year is actually the initial stage of development for WooCommerce, an open-source ecommerce plugin for WordPress. Next three years it will make an incredible spurt and stand on a par with Magento in 2015.

Top five sites are still the same, but the balance changes: Magento, PrestaShop, VirtueMart, Zen Cart; osCommerce. This year Zen Cart loses more than others – 56% of the market share and rolls down to the fourth position, while PrestaShop grows considerably (+25%).

Outside the top five we can also notice some moves, where the Shopify’s growth by 50% forces competitors to turn their heads in its direction.

At the end of 2014 Top 5 is drastically different in comparison to 2012: Magento CE, WooCommerce, PrestaShop, Shopify, VirtueMart. Only VirtueMart and Magento still stay on top, but if Magento grows, VirtueMart loses 203% of its share in two years.

Shopify is the SaaS ecommerce solution, which was able to reach the top due to the increase of its share by 232% from 2012.

In 2015 VirtueMart leaves Top 5 replaced by Magento EE, while the rest positions are occupied by the same solutions as in 2014.

As a result, the whole Top 5 changed completely in three years. Magento is still on top. 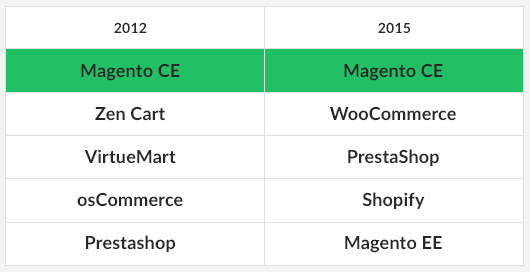 Perspectives of the Ecommerce Software Market

So, most leaders of 2010s are now fighting for survival, while ambitious newcomers are sitting comfortably on their places. Apparently, old platforms have little chances to return without cardinal renovations.

It’s clear that sooner or later legacy software will be replaced by some modern and innovative solutions, but, for how long does the average product life cycle continue?

Using the Google Trends data we composed a table, which describes basic product cycle periods of 14 main ecommerce platforms starting from 2004, the start of Google Trends. 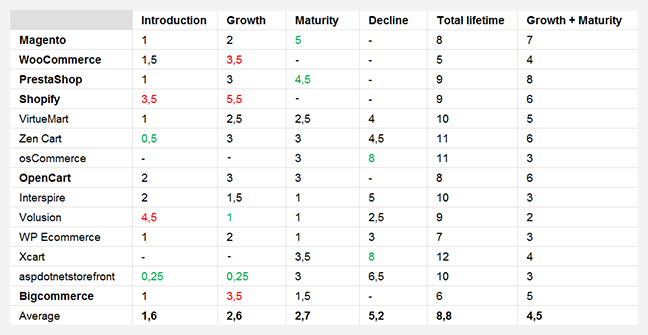 The table reveals that the market of ecommerce software is not actually mature, yet. Only 8 of 14 participants are at the Decline stage of life cycle, but stay in some demand still.

According to the table, the average ecommerce software products lifecycle is about 9 year. But, Google Trends cover the period, where most platforms continue developing and some were created before the start of monitoring. So, we need more time in order to make any statistically valid conclusions about ecommerce software life cycles. 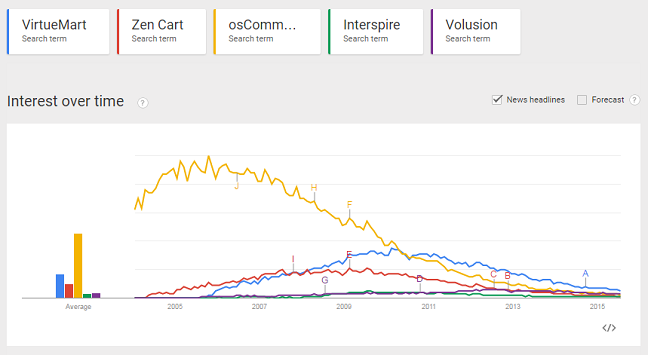 Still the table shows that Magento has a surprisingly long Maturity period, which is not typical for its precursors. At the same time, Shopify will possibly have even longer one, since its growth continues for 9 years, which is twice longer than the average duration.

We can also note that Magento is very similar to PrestaShop in all stages, but their product life cycles are far from fading. Magento is not declining, and it is obvious, but the duration of the Maturity stage is hardly predictable with any sufficient accuracy, so far. 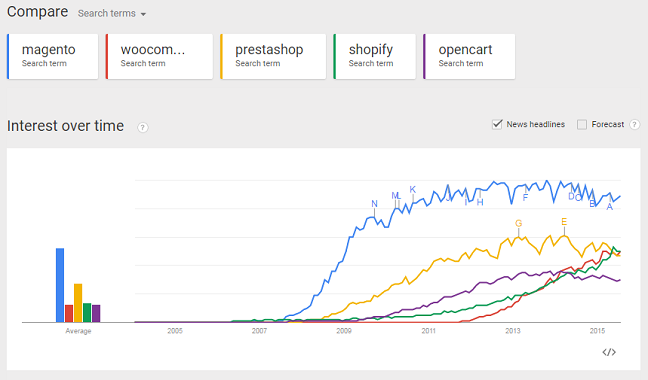 Nevertheless, taking into account the shape of other ecommerce platforms' graphs, which mostly have sinusoidal profiles in Google Trends, we built a visual representation of two development paths Magento is able to have quite possibly.

The first scenario is “Decreasing Magento”, when Magento 2 is not recognized by the market. In this case, the Maturity period will last approximately for 5 years yet and then the product will enter the Decline stage. 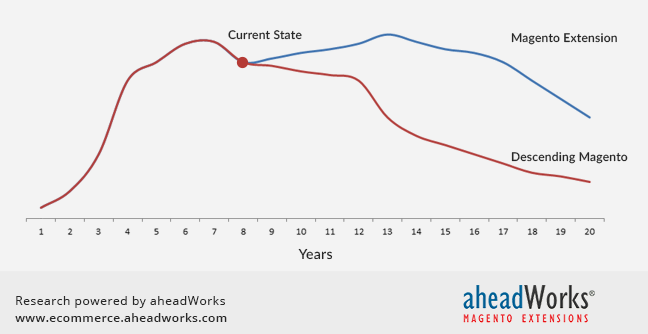 The second scenario describes the situation, when Magento extends with the help of Magento 2 and considerably increases the duration of the Maturity stage for 8-10 years. And, taking into account the improvements introduced by Magento 2 this way seems to be more realistic. However, this is just our reasonable assumption, since we have not seen similar trends in practice yet.

Magento is an incomparably stable platform and holds the lead for a very long time, which is not typical for its predecessors. So, its life cycle will presumably continue for another 10 or 15 years, depending on the scenario it goes. But, we believe that Magento 2 has all chances to be enthusiastically adopted by customers and allow Magento to keep its leadership in ecommerce for many years.

Add your comments below, please.